Home » Travel and Transport » How will Brexit impact travel?
× Share this Article

How will Brexit impact travel?

By now, you’ve heard the news that, in a close and historic vote, citizens of the United Kingdom have chosen to leave the European Union. The Brexit, as the referendum has been nicknamed, will not happen immediately. It will take at least a couple of years until the UK has completely left the EU. Still, the process will begin and the world has taken notice – particularly the financial markets.

What will this mean for travelers? How will it affect business travel? What will change? What will remain the same? There are many uncertainties and a lot of questions that still need to be answered. We’ve collected information from some of the most trusted sources to give you some insight about what this could mean for you if you’re planning international travel soon.

How will US travelers be affected by Brexit?

In the short term, your dollar will stretch a lot farther. Will hotels and airlines adjust to this change? It’s a little too soon to tell, however Money offers some ideas about how Brexit might change travel to the UK and to mainland Europe.  CNN also has a great guide to Brexit and the implications it has for just about everyone in the world.

How will UK travelers be affected by Brexit?

“There will be no initial change in the way our people can travel, in the way our goods can move or the way our services can be sold,” stated British Prime Minister David Cameron after the referendum. While it’s true that little should change in the short term, there is one expensive exception: the British Pound Sterling, the UK’s currency, has fallen considerably. The BBC tells us how this will affect UK Citizens.

British low cost carriers such as EasyJet and Ryanair (which is Irish but operates heavily within the UK) have stated that the days of cheap fares between the UK and the rest of Europe could be numbered.

In addition, Scotland and Northern Ireland voters overwhelmingly voted to remain in the EU – and there are uncertainties on whether these countries will work towards independence from the United Kingdom in order to remain members of the EU.

It’s far too early to know all of the changes that may happen. The BBC has a page of frequently asked questions that UK citizens are having, such as “Will I need a new passport?”, “Will I need a visa to travel to EU countries?” and perhaps most importantly, “How much French and Italian wine can I bring back into the country?”. The answers to most of these questions seem to be that nothing will change immediately and more details will emerge as discussions and negotiations occur between the British government, the EU and its member countries.

What do you think? How will the Brexit affect you? Will you plan a vacation to London or Edinburgh in the near future to take advantage of the exchange rate? How will it affect global commerce? What impact do you think it will have on business travel? Let us know on Twitter @TandTNews.

The post How will Brexit impact travel? appeared first on Travel and Transport. 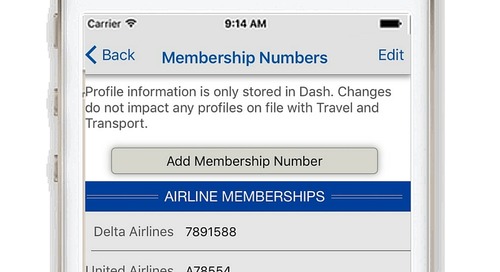 Store travel membership information and loyalty numbers in Dash Mobile for easy reference on the go! How to prepare for long airport security lines

Summer is upon us and security lines are getting longer and longer at major airports across the country. Sc...